“You know when dinner time rolls around and you’re thinking about takeout or a restaurant because you’re exhausted, only that requires actually, well, going out. To that end, I give you these options for empanadas and enchiladas take-out fake-out!” 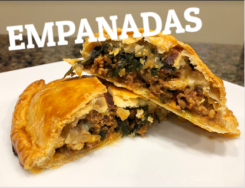