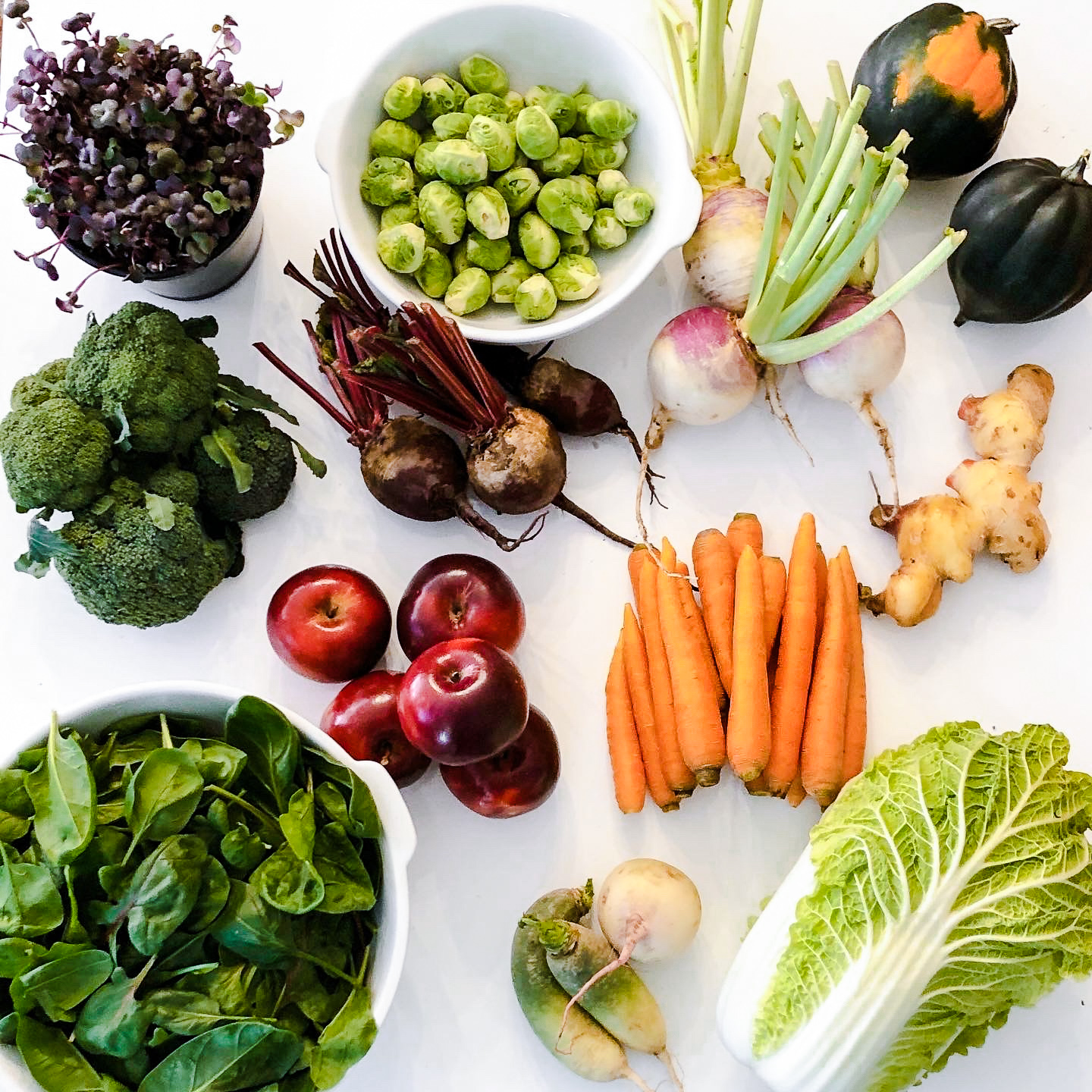 We have been exploring changing when the cart opens. Based on feedback, we are moving the cart open time to Sunday, July 7th at noon. The cart will still close at the usual Monday, July 15th at noon. Sunday is a busy shopping day for the IFC, and this change will allow our consumer members to shop every Sunday afternoon.

Things to bear in mind with this change:
Producer members will need to try and get their inventories adjusted prior to the new cart opening time.
Consumer members may notice that their account may show a balance from the previous cycle as we may not have all of the previous cycle’s information finalized prior to the cart opening. You do not need to do anything about this, please be patient with us and feel free to email me directly with any concerns.

Thank you for your support and encouragement as we make this change. If you have any thoughts, comments, or concerns please reach out to me at ryan@iowafood.coop and title your message CART TIMING.

If you’ve never tried cooking with lard–this cycle would be a great time to give it a shot! Lucky George Farm has their quarts of Large Black Lard priced 50% off! Normally they are $24, which means this cycle they’re only $12! This is an amazing deal for a local, delicious cooking oil. Their popular leaf lard is not on sale this cycle.

Not sure about cooking with lard? Isn’t that the stuff my mom was always telling me to avoid? Our consumers have tried it and love it! Read a few of their testimonials below:

I used the lard for Thanksgiving turkey and gravy and it was wonderful.

From my use, your leaf lard is far superior than regular lard. Your leaf lard doesn’t give food a porkish flavor or smell, unlike other lards I have used. I find it gives veggies more flavor, satisfying the “umami” taste buds. I sautee our breakfast veggies every time with you leaf lard, and bake with it whenever a recipe calls for butter/oil/coconut oil. Since I know how well you raise your pigs (both in life and death), I can confidentially cook with your lard all the time without fear of exposing my body to harmful components.

I bake potatoes, sweet potatoes, and every squash with your lard, and even my father, a smoker all his life who has nearly no smell, comments on how good my cooking smells (and tastes).

Lucky George Farm is my go to supplier for the leaf lard that I use in my pie crusts. As leaf lard is not easy to come by due to processing regulations, I love being able to get this product from an Iowa family farm. I am very anxious to try some of their other products as well.

Lard is a versatile cooking medium and we know you’ll get a lot of use out of it! In case you’re still a little nervous, here are a few tips:

Tips and Tricks for Cooking with Lard from Jess Mimick

Keep lard in the fridge, so whenever a recipe calls for liquid oil, I microwave the lard for 45 seconds, enough to soften it so it blends easily (both for liquids and solid mixing).

For sauteeing/frying I scoop 1-2 spoon full, and let the oil melt before adding the food. I find it cooks/browns food faster, so lower temperature and more stirring is important (for sauteeing/frying) especially for garlic and onions.

With sauteed veggies, (I like them hot with bit of crunch and only slight softness) I cook the veggies to 75-80% cooked & then turn the heat down to the lowest option. I think the lard keeps the heat longer, so it continues to cook even after the heat is turned down.

Good News! We’ve secured a location for a downtown drop-off site in the Mickle

Neighborhood Resource Center, which is at 1620 Pleasant Street in the Sherman Hill neighborhood. It’s a couple blocks west of the west entrance to the Methodist Medical Center complex. Our first distribution at this site will be from 4:30 t0 6 pm on Thursday, May 30th.

Adding this location should greatly increase the convenience for members who work downtown or who live nearby. We’ll use the kitchen area of the building, which is in its basement, but there’s easy access from a parking lot on the back side of the building.

Given today’s weather, we are postponing our distribution until tomorrow (Friday) from 4 to 6 pm and Saturday from 10 am to 2 pm.

Unfortunately, people who were going to pick up at our Ankeny and West Des Moines sites will need to come to Merle Hay Mall to get their orders. Sorry. It would be very difficult to get those products delivered and find the volunteers to make these drop-offs work.

Also, we will work with our Ames customers at options for their orders (which won’t happen on Friday as planned), and we’ll work with the rest of you who have can’t make our options work into their schedules.

We apologize for the inconvenience. A couple of other things:

1. Daily Bread Bakery (they are in Algona) won’t be able to fulfill their orders. Alison Hill extends her apology. Those products have been outed on your invoices.

2. Please send an email to distribution@iowafood.coop or call 515-450-6812 if you need to make other arrangements or have questions. 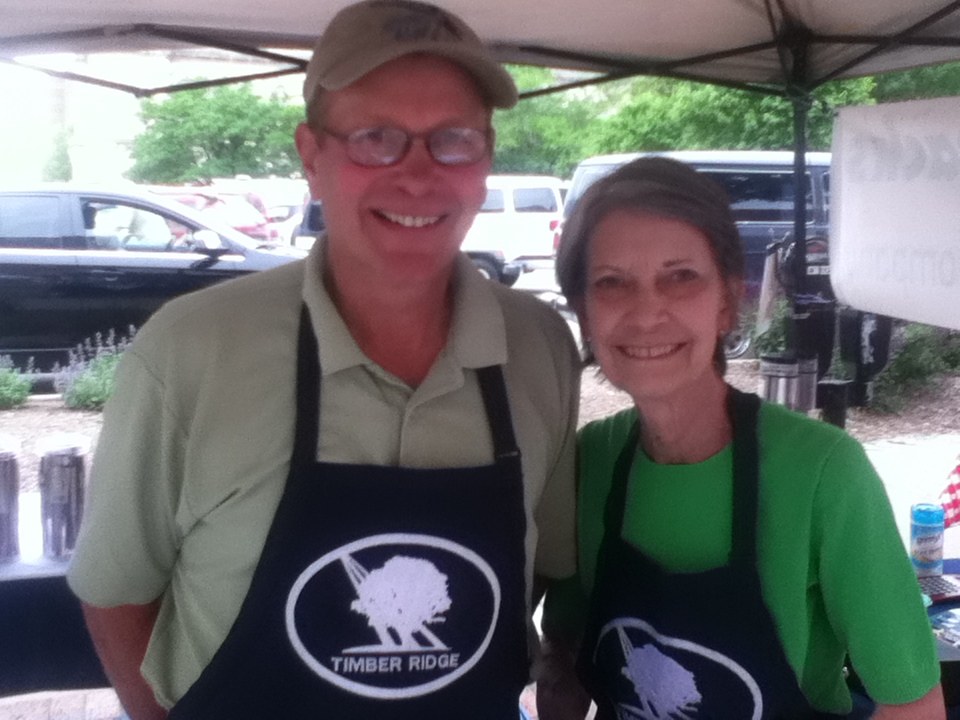 Pete and Cindy Woltz at the Farmer’s Market

Hi. Pete Woltz here with Timber Ridge Cattle Company. I want take this opportunity to thank the IFC board members for having the confidence in me to elect me as IFC President.  It is a great honor.

Part of what I want to do as your President is periodically write about important IFC topics.  I’ll start with a short story that is related to what our coop means to me.My sister-in-law’s family fled Cuba in the 60’s to take up residence here in the “land of the free”.  My sister in-law’s father, whose name was Pastor, soon began to miss the intimacy of his Cuban neighborhood.  To mitigate this emptiness, Pastor became a frequent visitor at his local Safeway where each day he was met with a smile and a “Hey Pastor!” greeting by the staff.  In his later years, Pastor’s daily visit to the Safeway was therapeutic to his loneliness as it served to replace the sense of “community” he so missed from his homeland.

I mention this topic because if we are to grow as a business, we must balance the importance of our community with sound financial decisions.  This balancing was clearly evident last week at the first IFC board meeting since electing five new board members at our annual meeting.

We started the meeting by having each of us describe what it meant to be an IFC member.  Overwhelmingly, they all agreed that we are more than a place to buy food; the coop represents a unique and rewarding community experience.  Just as for Pastor, the simple act of gathering food at the IFC opens an explosion of conversations, ideas, and relationships often missing from modern culture.

We went on from affirming the importance of our community to discuss how to grow sales, which have been flat for over a year.  The discussion focused on ways to better market our coop.  The enthusiasm and fresh ideas were invigorating, and the board is eager to undertake some new initiatives.  These include expanding our trial membership program, creating a chef’s blog with recipes and stories about our foods, and recruiting new producers with unique new products to expand and diversify our product selections.

The topic of adding new products led to a discussion of adjusting our standards on who can sell what products.  While pledging to maintain the integrity of our commitment to local products and producers, which we all agreed was a basic value of our community, the board agreed to consider granting variances in special situations to be able to offer popular products that have disappeared from our shopping cart.

We specifically addressed the lack of apples because of this year’s growing season.  The board agreed that in cases like this we would consider granting variances if 1) the variance was time limited and 2) the source of the product was identified. We’ve subsequently granted a variance to Iowa Orchard so they could sell apples between now and when next year’s crop arrives from an orchard they rent across the border near LaCrosse, Wisconsin.

I wanted to let you know about this change in our policies so you weren’t surprised.  We will continue to try to balance our commitment to the values that make us unique with the realities of running a sound business.  Indeed, we feel it can be done, and we believe this year has the potential to be a great one for the IFC.

What can you do?  Engage yourself in the most amazing, friendly, healthy community of local food gatherers in the “land of the free”.  Shop your IFC, tell your family and friends about us, and help with your time and talent!

Thanks for your time. Feel free to contact me at peter.woltz@timberridgecattle.com.

IFC members and producers, MARK YOUR CALENDARS! We will be conducting our annual meeting on the 3rd of November, a Saturday, at the Mickle Neighborhood Resource Center in Sherman Hill from 5-7. All members and producers are encouraged to attend! There will also be a tour of the Mickle Center’s kitchen facilities beginning at 4, highlighting the kitchen’s progress to become a licensed facility.

At the meeting we will discuss our struggles and successes over the past year, and where we will go in the coming year. We will also elect new board members. This meeting will be fun and informal, and children are welcome to attend.

Please bring along a main or side dish for the potluck if you can. IFC will provide drinks. Table service is requested as well, we will need some people to bring silverware and plates.

The address of the Mickle Center is:

Please contact us at info@iowafood.coop  if you have any questions regarding the meeting. We look forward to seeing you there!